One important part of validity is that based of public key cryptography. This allows each user to have an particular ‘account’, by showing that they have a secret piece of data, without revealing it.(signing data) It is then considered invalid if the users does not show he has the secret piece of data. (4)

As example, lets consider a just-a-cryptocurrency. Each account has an amount (of coins), and can send coins to an other account, but no more than you actually have.

A transaction could be

Can be defined to be valid if:

Where from_before and to_before are the balances from when the previous transaction or repetition listed the after-value.

This would be solved if the list where ordered the same way for everyone. Ordering this list is the most important part of Satoshi Nakamotos invention.

These are functions for which the pre-image is hard to find. What that means is that given h = H(x), it is hard to find a x that has h as output. Infact for cryptographic hash functions it is so hard that the only way to do it is to brute force; try a lot of x.(2)

Similarly, finding H(x) < h comes down to trying a lot of x.(1) It takes a lot of work to do so. Lets say the output is between zero and one; 0 ≤ H(x) ≤ 1, assuming the hash functions ‘mixes well and evenly’, so the probability of H(x) < h for some randomly picked x is h. I.e. d=1/h can be considered the ‘difficulty’, on average it takes d attempts.

This can be used against some kinds of DDOS or spamming, before servers handle a request, they could demand a solution. Any attacker then can send only send requests as much as his computer can solve the problem. It is a sort of ‘Proof of Work’; PoW.

Two other properties are also important. 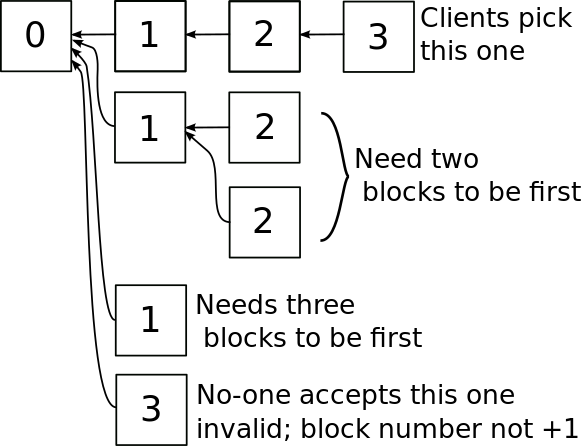 Here score of a block is defined as simply the block number.
(other approaches possible)

In blockchain mechanism uses this as proof of work as well. But instead of requiring H(x) < 1/d it creates a challenge based on the block we’re trying to build on. Basically H(append(x, building_on_block)) < 1/d. Here x is called a ‘nonce’.

How does this give give us the ordering that we want? Well, each block now has a previous block, because each block creates a problem that is based off its own data, and only solvers can lengthen the chain. The longest, most difficult chain is taken as the correct one by clients. Your reward from the block only counts if it is in the chain clients choose chain, and the easiest way to get it to count is to work on the most difficult chain.

So, we’re dependent on there being enough computation power being used for creating blocks. The coins themselves can be used to ensure difficulty, since if they are worth something, people will then ‘mine’, for them.

Finally, d is not actually a set value. It is varied based on how often a block is created. Difficulty is increased if too many blocks are created, and decreased if too few, so more attempted creations means that the difficulty will go up.

The validity of a block 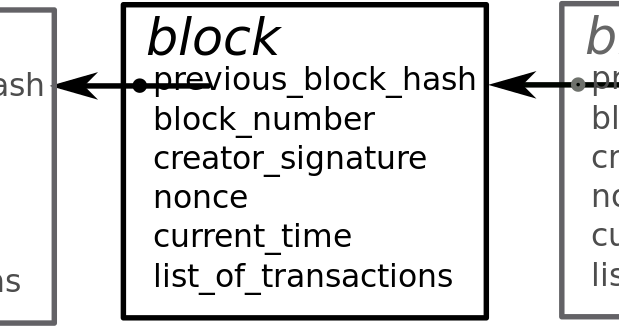 It is valid if:

Note that this approach is simplified, there are opertunities that allow for more features.(3)

Proof of Work requires a lot of computation as its mechanism. However, there is a way to give people a sort of ‘simulated mining power’. The simplest is to give each account a score H(append(account_id, building_on_block)) / amount_under_pubkey, and decrease h=h(t) over time, and further give the first-time priority. Lets say there is s 1 minute block time but your account is only valid in 2 minutes, it would be in your favor to pretend it is 2 minutes later.

PoS can use coin age to smooth out income with stuff like: H(append(account_id, building_on_block)) / amount_under_pubkey*last_time_reward, this has the issue that if you wait a long time, you have more than your fraction of simulated mining power. Really, there are too many variations to cover here. (or mining algos in general)

One main issue with PoS is that there is ‘nothing at stake’. If there is an alternate (block)chain of events, and you happen to win a block on it, you could just make a block for it. Another one is that the simulation is cheap. If you have 51% at any point in time, you can simulate forward to now, and pretend to be the real chain. Checkpoints help against this, but are centralized. Although in principle, you could have a bunch of friends and do it decentralizedly, in practice, i dont think it should be trusted that people will actually do that properly.

The rules of validity for Bitcoin

As in the example, each transaction refers to older transactions, but the rules for Bitcoin are actually more complicated. Our example implicitly refers to the previous send/receive of that account.

In bitcoin, you explicitly refer to block creations and other transactions, called inputs. It produces a list of outputs, each with a script that unlocks it. A script to send bitcoin sets those scripts up so that These scripts can be fairly arbitrary, but they are still very limited and difficult to use when you want to actually do stuff.(and some parts are currently disabled for fear of abuse) Typically they’re just a script that allows the recipient access to the bitcoins.

Also, this way of doing it isnt very efficient. I dont quite understand why this approach was taken. It could be a particular conception of how to get contracts, or a continuation of existing ideas out there that tried to patch up the lack of ordering.

The score of a chain in bitcoin is simply the block number.

The rules for Ethereum

Ethereum doesnt have the input-output stuff, nor does it have the repetition of the state after each transaction. Instead it has a state that is kept track of, and can rewind. Rewinding is necessary, of course, as it might turn out there is a more difficult chain out there.

Ethereum doesnt have much set in stone with regards to what blockchain mechanism it exactly will use.

Improvements on the simple example

Cant help myself but mention some possible improvements on the simple example.

Really, taking the improvements seems to move it toward what Ethereum currently is. Also, i dont entirely understand on how Ethereum rewinds it state at this point.

I explained the blockchain mechanism in terms of scoring and validity, and touched on Bitcoin, Ethereum work and a hypothetical ‘simple currency’ works. This is explanation of an idea that has a much larger range of possibilities than is actually explained, and has some blanks i left out, like how to manage the difficulty to regulate the rate of creation of blocks.

(1) Not sure if the one follows from the other. Not to be taken for granted. Of course, hash functions are well studied and PoW was a thing before Bitcoin.

(2) It must also be hard to find an x,y, x≠y H(x)=H(y). Otherwise someone could try stuff using two different blocks with the same hash.

(3) Particularly, that of lightweight clients. The state could be added in a Patricia tree, allowing for SPV(‘Simplified’ Payment Verification) clients that can get proofs from full nodes, it uses difficulty as a proxy for validity.

The transactions themselves arent sufficient, because you dont know if you’re getting an out-of-date end-state. However, putting them in a Merkle tree anyway, and having the before-states repeated in transactions, could allow it be be used as a Hanging block, if the other system it hangs from can do the computation needed to falsify transactions.

(4) The psuedonyms are undesirable for some applications. Zerocoin was the first cryptocurrency to do something about it, and there are different contenders.

Often they use zero knowledge proofs.