Note it uses a trick to avoid colliding the html-element-ids but 10/62 of the time it started with a number. Hence i didn’t notice, i have fixed this in 0.0.3

Finally put together page_html, so that linux/unix users don’t have to gather the whole bunch git repos of and configure lua to load it properly. I also fixed some annoyances.

It has userscripts talking to the server. One main one is commands.user.js, which is a commands panel that can be brought up with Control-“;”. The below also represents the features it brings:

Entries can be deleted/altered there aswel. No entering new ones there yet.

They've been tested with firefox on [Greasemonkey](http://greasespot.net/).

Not only more complete, but also not overwritten every time you go there.

It doubles as command to mirror images and pdfs. Saves having to organize those files when you download them. Viewing them with pdf.js, you can also bookmark them.

Note that it shows SQL, it can also run it. (Note: that may be a security concern, defaultly turned it off in lua)

But you can just throw in search terms in the input above. Something like tags:something should also work. 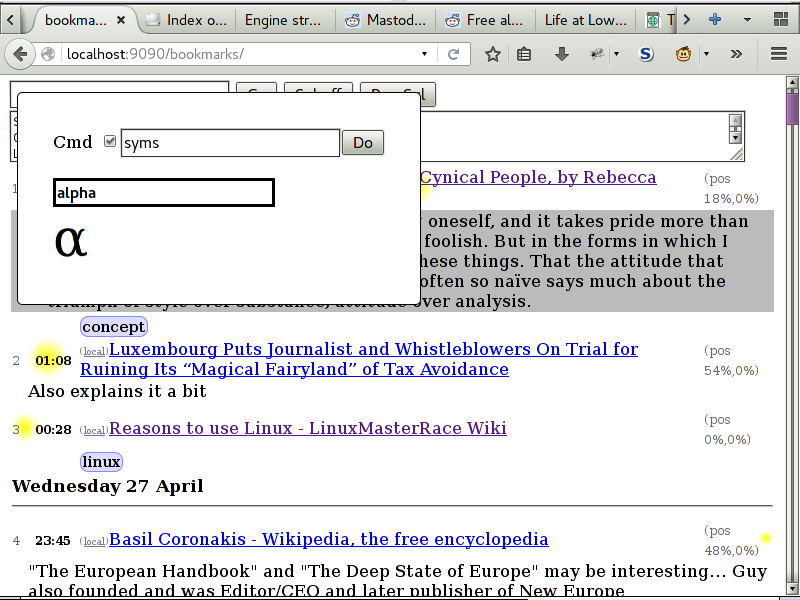 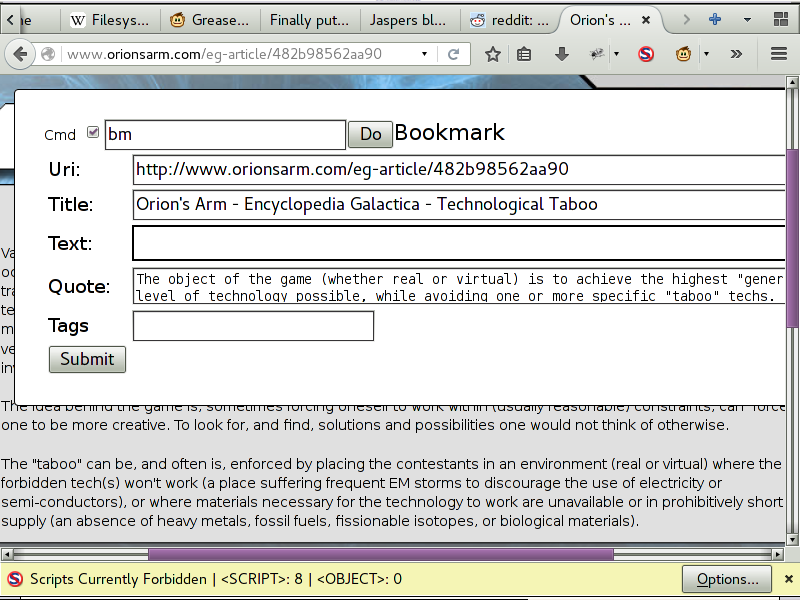 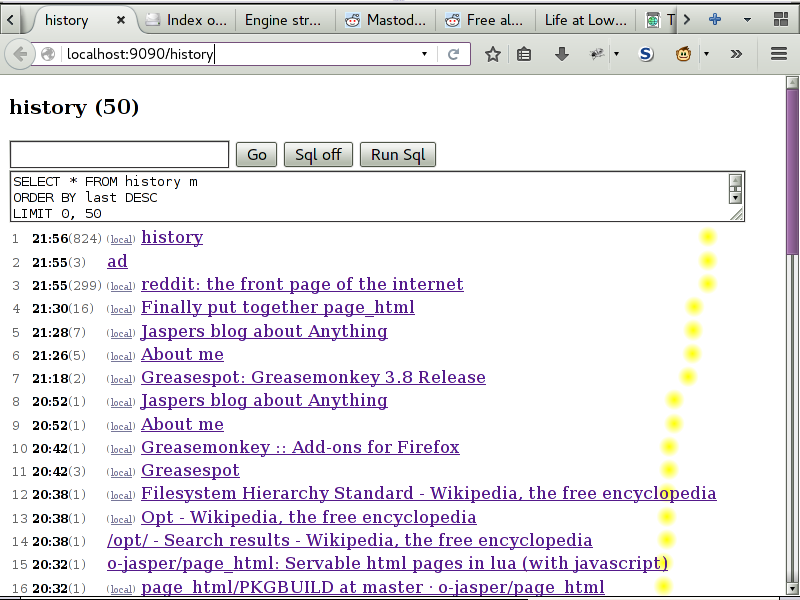 The file is at ojasper.nl/data/data/page_html_set.lua.0.0.3.tar.gz, contains instructions. Basically run one of the shellscripts from its own directory.

Windows isn’t particularly supported, suspect it is a matter of the correct lua-socket .DLL being loadable, and then running lua with packages available, but i am not sure.(careful with which .DLLs you trust)

for those with Arch Linux, there is an PKGBUILD. With that, running page_html.lua defaultly it runs on port 9090 that can be specified, but then you have to update the userscripts manually read the right port aswel.

Once running, http://localhost:9090/userscripts contains the userscripts, Greasemonkey can load them by just visiting the files. Haven’t tested other userscript implementations.

The PKGBUILD does not follow etiquette properly. It just writes down /usr/bin/page_html.lua with a package.path loading the lua from /usr/local/share/page_html.lua/ which just contains the same as the tar.gz. In the future PKGBUILDs should be done better. (afaics, its not particularly bothersome to anyone?)

There is some room for it;

However, no way to readily add any to the command-interface yet (though you could modify)

Nice modifications can be sent as pull-requests.

Not quite there yet

There are many things that should be improved.. Like:

Those things probably most directly affect experience but then the below are important too.

Finally, there are more tools a browser can have, and these could clearly be far more customizable. It is a ghost of the functionality i want to have. I want the bookmarks to be sharable to different levels from between-friends to completely public. And preferably not with a single way of transferring the data.

I have been thinking about a overarching approach to fit that into. Applying it seemed like waiting too long to release it, but fixing the things ignores the new approach, so just got rid of annoyances and did the low-hanging fruits.

The new approach is an evolution of the idea in the previous post. I’ll post about it later, that’ll discuss from square one.